Women as higher-earners in their relationships is a relatively new phenomenon in American culture and abroad. There are many factors that have contributed to this new circumstance including increasing college enrollment for women, the Great Recession of 2007, and a common desire among women to become independent by entering the workforce. These factors combined have allowed women to emerge as formidable competitors for jobs and payroll income in this country. Recent research has unveiled a shift in the income hierarchy of millions of marriages across the globe. Together, we will navigate unchartered territory like trailblazers- as we discover how relationships are affected when She Makes More! 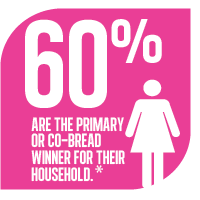 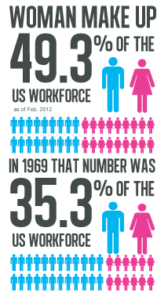 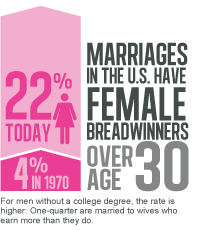 Here are some statistics that may surprise you:

Center for American Progress in 2010 revealed that women hold nearly 50% of all American payroll jobs.

The U.S. recession that began in December 2007 disproportionately affected male-dominated jobs with men losing 3 out of every 4.

According to an analysis of Census data in 2008 by Reach Advisors, childless women between 22 and 30 were earning more than their male counterparts in most U.S. cities.

Center for American Progress in July 2009 described a doubling in the number of households with a working wife but an unemployed husband in 2009, compared with 2007 when the U.S. recession began.